Who invented geometry? As a student of geometry, “Euclid” is the name that would first pop into your head as the answer to this question. While it is true that Euclid was the one who developed the solid foundation for geometry, there were great contributions from different mathematicians all over the world.

Geometry is a branch in mathematics that focuses on the relations and properties of lines, solids, positions, points, surfaces, sizes, and higher dimensions. Who created geometry? In this article, you will be learning everything you need to know about the invention of geometry. 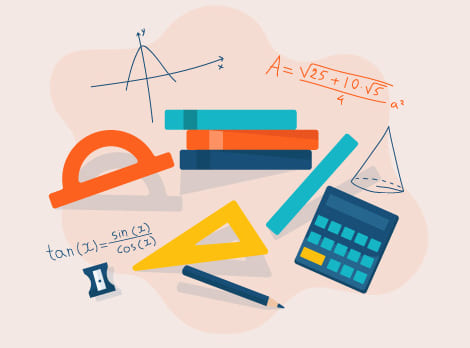 Indeed, the credit for the invention of geometry goes to Euclid, the great Greek mathematician who lived around 300 BC. Euclid was the one who published the “Elements” that contained aspects of geometry. When you ask, “Who is the father of geometry?”, the first answer you will get is Euclid. However, despite having this great achievement tied to his name, no one knows much about Euclid. What scholars and researchers know about this man is what Proclus, another Greek mathematician wrote of him in summary. In Proclus’ work about Euclid, he wrote that Euclid was a teacher at Alexandria and believed that the “Elements” were the only way to geometry.

Euclid’s “Elements” had its source in the work of other men. These included the works of Hippocrates of Chips and Theudius. Even though Euclid’s work drew inspiration from these sources, historians agree that he had most of the ideas in the “Elements”. Indeed, Euclid’s “Elements” talks about geometry but it also explored other areas. From Books I to Books IV, Euclid discussed geometry in detail. He wrote that before one could build a logical geometry, there had to be the right foundation. He wrote about the five unproven assumptions (axioms), elementary theorems, the Pythagora theorem, among others. In the “Elements”, Euclid also gave the definition of a line as one “without breadth”. It was in his work that the term “a straight line is what joins two points” came from. It was also Euclid that wrote that all right angles are equal.

In Books VII-IX of the “Elements”, Euclid discussed the elements of the number theory where he wrote that numbers greater than 1 were positive integers.

Even though Euclid had drawn his work from previous sources, the people of his time considered his as the one with the final say. This is why mathematicians all over the world regard him as the father of geometry.

Coordinate geometry is one of the sub-areas in geometry. The credit for the development of coordinate geometry goes to the French mathematician, Rene Descartes. History shows that this man developed this in the seventeenth century and there was quite a remarkable story behind this. The story is that Rene Descartes was one who never slept early and on one of such nights, he observed the movements of a fly on his ceiling. While the fly moved, Rene Descartes thought about how he could describe where the fly was. In the end, he concluded that he could use one of the ceiling’s corners as a point of reference.

Now, the ceiling was in the shape of a rectangle and the bottom left corner was the point of reference. Using this, Rene Descartes could accurately guess where the fly was: all he had to do was measure the length it would take to go in both horizontal and vertical directions to reach it. Both horizontal and vertical directions are what are called the coordinates of the fly. Now each of these coordinates shows the ceiling’s unique point and every unique point had its pair of coordinates.

This coordinate system that Rene Descartes developed helped to link algebra and geometry. Through this, one could describe shapes in geometry such as circles. All one had to do was use the points’ coordinates which gave it its shapes.

Fractal geometry has also been useful to other fields as physiology, computer graphics, physical chemistry, and fluid mechanics.

Even though the hyperbolic geometry rejects the Euclidean parallel postulate, it does agree with the remaining four Euclidean postulates.

Another sub-area in geometry is abstract geometry. The credit for the invention of abstract geometry goes to Pablo Picasso and Georges Braque in 1907 – 1908 when they discovered cubism. In Holland, Piet Mondrian was the one who invented algebra the geometric abstraction language. He did this in collaboration with Bart van der Leck, Theo van Doesburg, and Vilmos Huszar. The purpose of Piet Mondrian’s work was to portray pure geometric forms which he termed as absolute reality. Piet Mondrian had his geometric style and he called it, “Neoplasticism.”

In Russia, Kazimir Malevich was the first to introduce the geometric abstraction language with a geometric style he called “Suprematism.”

Analytic geometry is another sub-area in geometry. The credit for the invention of analytic geometry goes to both Frenchmen Rene Descartes and Pierre de Fermat. They created analytic geometry by using Francois Viète’s geometric loci. However, they developed their geometry far beyond Viète’s. Instead of using fixed, they used variables to represent distances. While Rene Descartes emphasized that mathematicians should note a general algebraic curve, Pierre de Fermat stressed an x and y coordinate relation dictated a curve.

Despite the fact their great contribution to geometry, they both feared criticism. Rene Descartes published his work but made it difficult to read. Pierre de Fermat, on the other hand, never published his work. It was other mathematicians after them who accepted their work and published them. This is how both Rene Descartes and Pierre de Fermat are able to get credit for the invention of analytic geometry.